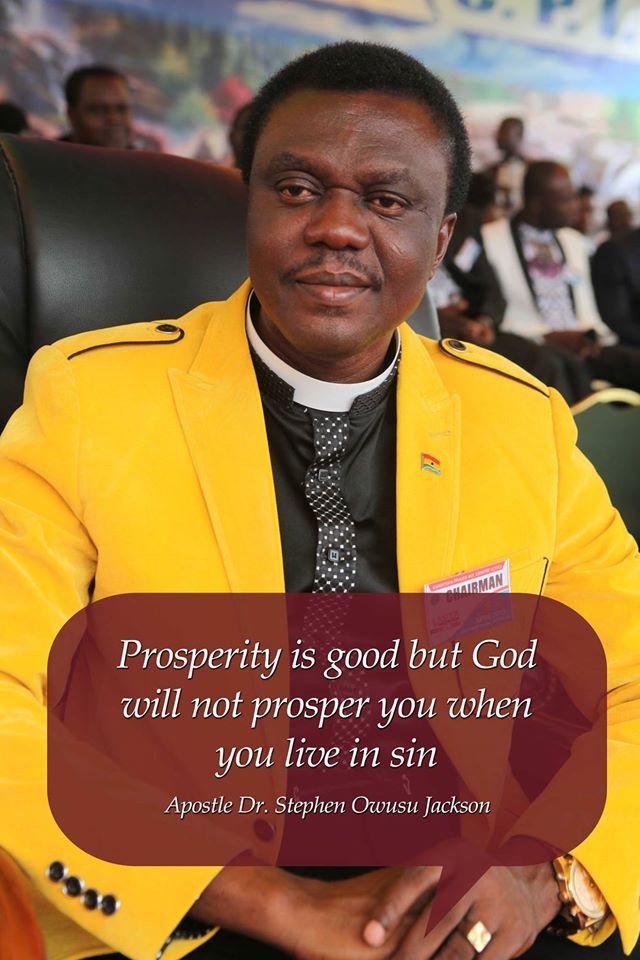 Apostle Dr. Stephen Owusu Jackson is currently the Chairman of the Christian Praise International Center (CPIC) headquartered at Pig Farm Accra, Greater Accra Region of Ghana with Mission Centres in Italy, Israel, Germany, Neitherlands, London, France and the United States of America. CPIC seeks to bring humanity to the fullness and stature of Christ. He is successfully married to Diana and blessed with two children, Sarah and Jackson Junior, as well as a countless number of adopted children.

Apostle, Dr. Jackson Owusu was baptized by immersion at the age of 16 in 1980 and had the Holy Spirit baptism in the same year. Filled with great grace and endowed with much anointing, he grew up in the service of God at an early age walking and working with pastoral and administrative leadership of the church. His humility gave him access to both high and influential personalities in civil society, including the clergy, chiefs and law makers.

He schooled at Sunyani Technical Institute from 1981 to 1985 and attended Hope Institute of Theology from 1986 to 1988 where he obtained a DIPLOMA in Theology.

He also holds Bachelor’s and Master’s Degrees from International School of Ministry, UK. His ministry and positions include: Date of Appointment 1988, Date of Ordination 1990, Youth Leader, Dormaa Ahenkro 1978-1980,Regional Secretary,Greater Accra 1991-1999, Regional Pastor/National Youth Pastor 1995-2003,Chairman, National Projects Committee 1998-2003,Area Apostle, Greater Accra Region B 2004-2014.Thus, like the Biblical Gamaliel who sat at the feet of the Apostle Paul, Apostle Dr. Stephen Owusu Jackson was ordained into the Pastoral Ministry by BISHOP PROF. ANNOR-YEBOAH and has sat at the feet of and received tutorship from the ‘ASEMPAKAHENE’ BISHOP PROFESSOR ANNOR-YEBOAH, professor of the Bible for 26 years!

Apostle Dr. Jackson Owusu operates in the five-fold ministry. He is an apostle, a prophet, evangelist, pastor and teacher. His devotion and dedication to the work of the ministry is undeniably exceptional and it was not surprising that he was chosen to lead this great church after the demise of the founder.

Oops, you forgot something.

The words you entered did not match the given text. Please try again.

Reply JamosDuaft
9:45 AM on May 31, 2021
Thank you, Loads of information.
https://topessaywritingbase.com/

Reply JamosDuaft
8:27 PM on June 4, 2021
Amazing material. With thanks.
https://scoringessays.com/
how to write narrative essays
homework pass
how to write an conclusion for an essay
write my papers
why do you want to go to college essay
homework help cpm
how to write 5 paragraph essay
thesis writing help
easy steps to write an essay
argumentative essay
essays website
help writing thesis
essays custom
https://kehillathisrael.webs.com/apps/guestbook/

Reply JamosDuaft
1:15 AM on June 9, 2021
Many thanks. Loads of data!
https://essaypromaster.com/
what to write in a college essay
https://freeessayfinder.com/
essay for college application
https://bestessayscloud.com/
how to write an interview essay
https://topessayssites.com/
college scholarship essay
https://neatservices.webs.com/apps/blog/show/49737680-what-means-
neat-services-inc-